Five wrongfully convicted men, one judge, no compensation from the State

Thanks to the combined efforts of the Wits Justice Project, human rights attorney Egon Oswald, advocate Carol Steinberg and wrongfully convicted co-accused Thembekile Molaudzi, two men have left prison carrying little else besides a heavy burden of betrayal by the criminal justice system. 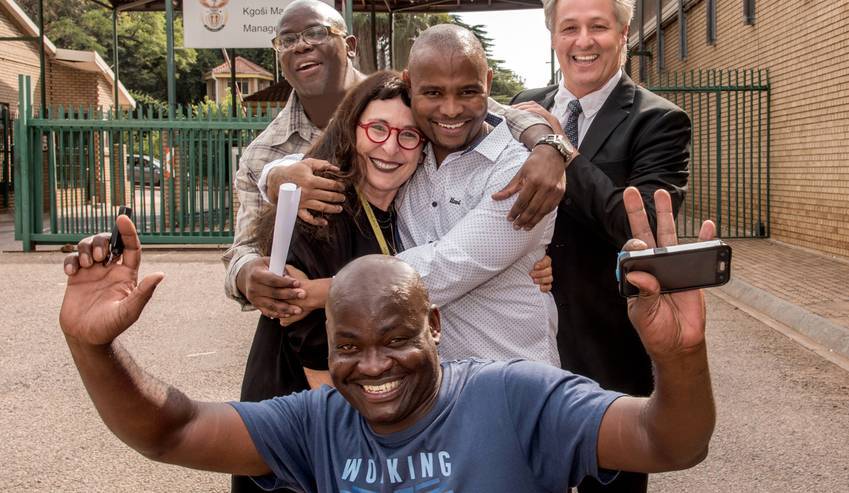 Before convicted murderers Samuel ‘Sampie’ Khanye and Victor Moyo walked out of Kgosi Mampuru’s spiked prison gates on 24 March, Khanye had just one request which wasn’t granted. He wanted to tell prison director Mabuti Tshele that the Constitutional Court had overturned the men’s life sentences and convictions on four counts – including murder and robbery – and ordered their immediate release: “Officials say all inmates sing the same song and Tshele called me a liar when I said I knew nothing about this crime. After 14 years in jail for a crime I didn’t commit, the Court has proved I’m innocent.”

After struggling to prove their innocence for what seemed a lifetime, an elated Khanye (37) and Moyo (35) were vindicated by order of the highest court in the land. Thanks to the combined efforts of the Wits Justice Project (WJP), human rights attorney Egon Oswald, respected Advocate Carol Steinberg and wrongfully convicted co-accused Thembekile Molaudzi, the men left the prison carrying little else besides a heavy burden of betrayal by the criminal justice system. Ironically, North West Judge President Monica Leeuw, who convicted the men in 2004, also signed their warrant of liberation.

Both men had protested their innocence since their 2003 arrest when they were rounded up as suspects – along with six others – following a botched hijacking and murder of Mothutlung policeman Dingaan Makuna. Hoping truth would prevail, Khanye recently agreed to participate in a prison Victim-Offender Dialogue (VOD) programme, to meet Makuna’s family and “tell the truth” to help both obtain psychological closure.

“I told the truth,” says Khanye, “I said I never committed the murder. When I started crying, Tshele, who was at the meeting, told me to stop shedding crocodile tears and obstructing the course of justice.” Moyo refused to meet the family: “I never killed anyone. I know nothing about this crime. The worst part was no one believed me. I saw a psychologist but all she could tell me was ‘be strong’.”

Failed by the police, the courts, legal aid lawyers, private attorneys and an advocate appointed by the Johannesburg Bar Council, Khanye and Moyo can expect no compensation from the State. Nor will Leeuw shoulder any legal consequence for the lost years and shattered dreams of five co-accused men – including Khanye and Moyo – she convicted and sentenced to life in 2004. (The men’s convictions have subsequently all been overturned by the ConCourt.)

“I’m excited but I’m scared to face the real world,” Moyo said outside the prison gates. “I’ve been here a long time and everything is different now.” Luckily, Khanye and Moyo can turn to “old-timer” exonerees Molaudzi, Boswell Mhlongo and Disco Nkosi for support, as they attempt to rebuild their broken lives in the weeks ahead. Mhlongo and Nkosi’s convictions were the first to be overturned in a precedent-setting 2015 ConCourt case.

Mhlongo and Nkosi’s exonerations paved the way for Molaudzi, who spearheaded the long battle to prove the men’s innocence, to appeal his own conviction, and motivated Khanye and Moyo to fight for their freedom. “When Thembekile left prison, he promised he’d do everything in his power to help us,” Khanye says. “He’s a man of his word. Whatever he says, he fulfils.”

It was Molaudzi who first alerted the WJP to Khanye and Moyo’s predicament and persuaded Khanye and Moyo to lodge their ConCourt appeal. This was no easy feat. For starters, Legal Aid was unwilling to assist them and neither could afford R6,000 to print 25 copies of their trial record as required by the court. “My brother gave me R3,000 and I earned R60/month as a cook in prison,” Khanye says, “and I saved every cent my brother and sister gave me for toiletries.”

“I only managed six copies,” Moyo explains. “That’s why I was the second applicant and why we lodged a joint application. I come from a poor family. My father was killed in a hit-and-run a car accident two years before our arrest and my mother lived in a shack when I went to prison. There was no one to help me. My mother was an only child. I have no aunty or uncle. Only she and two of my five siblings stood by me….”

Eventually the men scraped the money together. Assisted by Johannes Mogoba, a fellow-inmate studying law with Unisa, Khanye and Moyo lodged a joint ConCourt application for leave to appeal in April last year. The final ugly twist in the men’s unfortunate tale came after the ConCourt asked the Johannesburg Bar Council to appoint an advocate to represent the men on a pro bono basis and prominent Johannesburg advocate Naome Manaka took on the case last July.

Initially overjoyed, the men’s excitement was short-lived. Manaka never consulted with her clients or informed them of progress, and mostly would not take their calls. The ConCourt fared no better in its attempts to chivvy Manaka along. In spite of letters sent to her on behalf of Justice Johan Froneman and three subsequent letters from the Registrar of the Court asking when submissions would be filed, Manaka failed to respond or even meet her own deadlines. Nor did Manaka respond to four requests by the WJP for comment.

More than five months after Manaka’s appointment, Khanye heard fortuitously via the prison grapevine that she had submitted heads of argument on his behalf to the court: “One of my co-accused heard from his legal representative Advocate Laurence Hodes. I phoned Manaka and asked to see the papers. She said she never had copies, not even in her computer.”

By the end of January this year, the two inmates were desperate and Molaudzi asked the WJP to obtain copies of Manaka’s submissions from the court. To their horror, they discovered Manaka had only made submissions on Khanye's behalf, she had conflated and confused the two men’s alibis, the arguments contained material discrepancies and she hadn’t dealt with all the relevant issues. “Manaka just wanted to get rid of our case,” Moyo notes. “She never cared about us, or our freedom….”

Moyo sought solace in prayer, going down on his knees sometimes five times a day. The men knew only too well that the ConCourt was the last port of call in a protracted legal battle to prove their innocence. With their liberty at stake and buoyed by the support of the WJP, who roped in attorney Oswald to help, the two indigent inmates took an extraordinarily brave decision: They instructed the Bar Council to terminate Manaka’s mandate and requested the urgent appointment of alternative counsel.

Steinberg, who last month successfully argued the Sassa matter in the ConCourt on behalf of Corruption Watch, stepped into the breach and lodged replacement heads of argument three weeks later. A few days later, the State conceded that Khanye and Moyo should never have been convicted and the court ordered their immediate release with formal judgment to follow.

The five men’s freedom rested on complicated legal arguments relating to the admissibility of extra-curial evidence of a co-accused which the ConCourt deemed unconstitutional after Mhlongo and Nkosi’s appeal. All five were convicted on the recanted, uncorroborated hearsay evidence of Accused Number One whom a full bench of the NW High Court deemed “a reckless liar”.

A bungled SAPS investigation failed to produce gun residue, independent witnesses, fingerprints or any other form of tangible evidence linking the five men to the crime. In Khanye and Moyo’s cases, identification parade evidence was so poor the court disregarded it. And Khanye told the court during a trial-within-a-trial that he was forced to make a statement after being tortured by the police.

“The police assaulted and beat me until I agreed to co-operate,” the former Brits golf caddy says. “They put my head inside a car tyre tube and covered my face so I couldn’t breathe. Then they beat me with a hosepipe and broomstick. They tortured us for two days, also with electric shocks, to make us confess. They said they wouldn’t stop torturing us unless we told the magistrate what they said. In the end, I signed the statement they gave me.”

Two weeks before the conclusion of their nine-month trial, Khanye was subjected to suffering of a different order: His 55-year-old father, Elsas, had a fatal heart attack and the “high-risk offender” was not allowed to attend his funeral.

“The police kept saying I was the murderer and I was very badly assaulted,” Moyo recalls. “They gave me a statement and told me what to say but I refused. I was at a 21st party in Polokwane. I knew nothing about the murder and had never been to Mothutlung. I brought three people to testify who were at the party. It didn’t make any difference. The court accepted three statements of Accused Number One which all contradicted each other…”

When the men arrived at Kgosi Mampuru C-Max after sentencing, they claim they were forced to strip naked, assaulted, shocked with electric shock shields and tortured for no apparent reason in front of female warders. After their transfer to Kokstad’s eBongweni C-Max prison, designed to house the country’s most dangerous criminals, they were assaulted and tortured again.

Throughout their ordeal, Khanye and Moyo leant heavily on Molaudzi for emotional and practical guidance as they struggled to obtain their transcripts that were needed to appeal their case. Eight years after their conviction, prison warder Levy Maphakane took pity on Molaudzi and asked the WJP for help. Prior to this, the Legal Aid advocate who initially represented Molaudzi claimed his office burnt down and he’d lost all his records.

After a second Legal Aid advocate failed to find the records, Molaudzi, Khanye and Nkosi’s families raised R18,000 between them and paid private attorneys to find the records, even though indigent inmates are entitled to these documents at State expense. When the attorneys eventually delivered the transcripts two years later, more than half the 1,023 page record – including the most crucial evidence – was missing. “We didn’t commit a crime,” Molaudzi says, “a crime was committed against us…”

After repeated requests, Leeuw finally agreed to retranscribe the records and the men were in a position to appeal their case – a constitutional right and a delay Justice Edwin Cameron subsequently described as “egregious”. Their appeal was dismissed by a full bench of the NW High Court. Subsequent Supreme Court appeals were also dismissed without reason.

Despite Molaudzi’s indefatigable personality and constant attempts to buoy their spirits, the men were growing increasingly despondent. Mhlongo had twice attempted to end his life and a third attempt landed him in a six-month coma. “There were many times when I lost hope and thought I can’t continue – especially when Boswell tried to commit suicide,” Moyo says. “He left a note telling his mother it was better for him to die. I felt the same. If it weren’t for my mom who stood by me and my son, Jimmy, who is now 14, I’d have killed myself long ago…

Clearly, Dingaan Makuna and his family were not the only victims of a monstrous crime.

Unlike Moyo, Khanye never saw his mother for two years before his release: “I didn’t want her to visit. Every time she came she cried the whole time until visiting hour was over. I disappointed my whole family. If I wasn’t in this mess, maybe my father would still be alive?”

Fourteen years later, five men and their families are proof of the human cost of judicial error, the fallibility of an increasingly dysfunctional criminal justice system and the fact that not only guilty people find themselves behind bars – especially if they’re poor. “It’s not only me and Victor in prison for nothing,” Khanye says. “There are many, many others….” Sometimes truth is stranger than fiction.