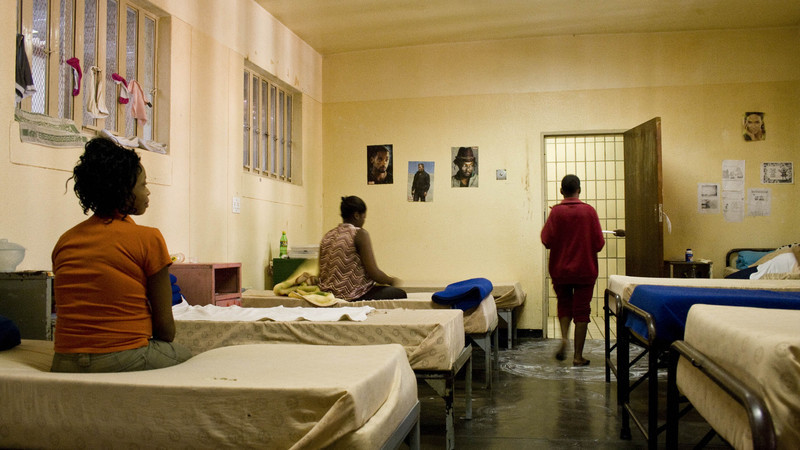 Ruth Hopkins's second piece in her four part series on women in prison. She spoke to women incarcerated in Pollsmoor prison in Cape Town and Johannesburg Correctional Centre about how they ended up in prison and how they survive behind bars. This is one of their stories.

I met Uche in 2010 when I was 19 years old. He was a handsome tall Nigerian man. We started dating and I fell in love. He made me feel so good and wanted. I had never had that kind of attention, from a man who said he would do anything for me. In no time, I felt like I would do anything for him. We moved from Johannesburg to Cape Town a few months after we met. It was there that I found out he was a drug dealer and that several women worked for him in prostitution. Because I was so in love with him, I complied when he asked me to recruit girls for him. I just convinced them to work for him and then I was done. I didn’t really want any further involvement.

In 2012, I fell pregnant for the first time and I gave birth to our baby girl. I decided to stop working for him. This is when he became emotionally and physically abusive; he would beat me up and lock me in the house for days. One day, he called me into a meeting with his brother. He told me that either I continue working for him or he would make me work as a prostitute as well. I asked him to just send me back home to my family in Pretoria. Uche then moved towards me and slapped me in the face. I lost it and slapped him back. He grabbed a broken bottle and came towards me and that is when I saw a knife on the table, I grabbed it and started stabbing him. I fell on the ground and he started kicking me in the stomach and face.

He was taken to the hospital with seven stab wounds and I was locked in a room in the house. His brother told me he would kill me if his brother died. Thankfully he survived and I was allowed to leave the house. He didn’t file any charges against me, because we had a child together and he let me return to Pretoria.

I worked for a Nissan dealership for two years and my life was slowly starting to feel normal again, when Uche suddenly turned up. He was begging for forgiveness and convinced me that he was leaving the life of drugs and prostitution behind.

I came back to Cape Town and soon found out that he was lying, he had ‘girlfriends’ everywhere who were working for him. One of those girls eventually decided to get rid of me and she reported me to the police, who in March 2014, arrested me for sex trafficking. Uche was also arrested when they found out he was my partner.

While I was awaiting trial in Pollsmoor prison, I found out that I was pregnant with Uche’s child again. I was sentenced to 15 years, five of which were suspended, when my daughter was three days old.

The birth was very traumatic. I was on my way back to the prison from court when my water broke. They brought me to Grooteschuur hospital in Cape Town because I didn’t have any labour pains and I needed to be induced. In the maternity ward, a warder chained my legs to the bed. I gave birth in manacles. The doctor didn’t comment on the leg cuffs. The only other person in the room when I gave birth was a Department of Correctional Services (DCS) warder. When I was brought back to the ward, I saw a young woman in the bed next to me. She had also just given birth but was surrounded by her baby daddy and family members. I felt very lonely and I cried.

In Pollsmoor prison there is a mother and baby house. It is literally a house on the prison premises with a room for each mother and her child. There is a garden and a pool and lots of toys for the children to play with. The babies were fed three times a day, they were given fruit and pap and milk.

When I was transferred to Johannesburg prison in September 2016, I was expecting the same level of care, but it is completely different here. The Pollsmoor warders warned me about this, they said a baby had died in Johannesburg prison a few years previously

The mother and baby unit is in a communal cell in the prison. Next to every bed there is a baby cot and a small chest of drawers. The doors in the cell are broken, which means that the children can walk straight into the showers and toilets. The plumbing is bad, water is leaking onto the carpet and there is a terrible smell that gets into everything.

The hardest thing to deal with in prison is when your child is sick. As a mother, you need to be strong and fight. My daughter was bitten by some insect and her ear started swelling up. I begged the warders to help me but they said there was nothing they could give her. When I finally spoke to the nurse, she gave me an ointment that didn’t help.

It is very easy to contract TB in prison. The prison management is supposed to provide medication to all babies to prevent them contracting the disease. But the problem is that they sometimes run out and don’t give the babies the meds for up to three months.

I came to realize that this was not a safe environment for my daughter and so after five months I decided to hand her to my mother. Babies are allowed to stay with their mother for two years, but I felt prison might kill her.

My daughter is turning two years old soon. I am very happy she is with my mum now. It is heart-breaking when she visits. She can talk now, but when she is here she refuses to speak. She runs away from me, clearly scared. Only when my mother is leaving with her, will she turn around and wave and say bye bye to me.

I have found it very difficult to connect to my family members since I came here. I can’t really sit with them anymore. I don’t know what prison has done to me but I don’t have anything to say to them. They keep asking me how I am, my mother is always crying and I feel like I need to tell them the same story over and over again. I’m no longer the person I used to be: jolly, talkative and fun. I’m more reserved and don’t trust people, I’m always wondering: what are their intentions?

I suffer from depression and I went to see a psychologist in here, who prescribed some tablets for me, but I felt like they made me crazier, so I stopped taking them. In prison, there is huge stigma attached to mental health issues, fellow inmates tell me I must be crazy for seeing the psychologist.

In 2020 I will be eligible for parole. My dream when I get out is to study. I want to make something of my life and take care of my two daughters.