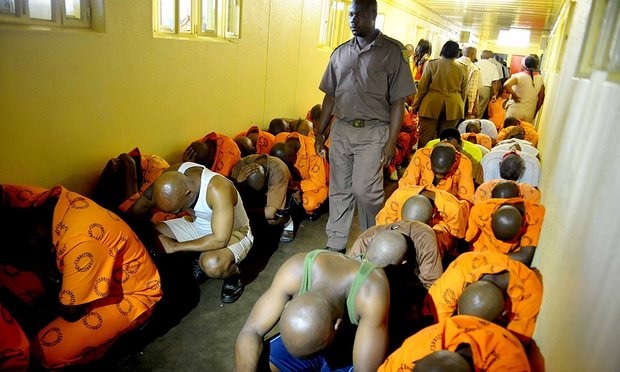 Whether murder, attempted murder, culpable homicide or torture charges are instituted against the implicated officials remains to be seen. JICS has no statutory powers and is unable to compel DCS to comply with its recommendation that the officials are appropriately prosecuted.

Currently, according to Civil Society Prison Reform Initiative (CSPRI) director Professor Lukas Muntingh, in spite of thousands of complaints of assault recorded by DCS, the Independent Police Investigative Directorate (IPID), JICS and the SA Human Rights Commission, there hasn’t been a single prosecution of a correctional official implicated in the death of a detainee for years. And Muntingh is only aware of one prosecution of a state official for the crime of torture since torture was criminalised in 2013.

However, with new Inspecting Judge Johann van der Westhuizen at its helm, JICS is investigating the possibility of a public hearing – as permitted by both the Correctional Services Act and the Commissions Act – to establish the truth of what really transpired at St Albans, and possibly at other prisons as well. The only time a similar hearing has taken place was nearly 20 years ago, under the auspices of Judge John Trengove, JICS’ first Inspecting Judge.

If inmates are to be believed, human rights violations, overcrowding, assaults, torture and frustration with managements’ refusal to deal with their grievances are at the heart of the matter. Though DCS’ version of events may differ, despite three requests from the Wits Justice Project (WJP) last week, DCS was still unable, or unwilling, to confirm the numbers of deaths, injuries or causes of chaos at the four prisons.

“The completion of the multidisciplinary investigations will confirm the exact cause of these incidents… While it is important for DCS to finalise investigations as soon as possible, numerous factors outside its control influence the time taken to complete an investigation,” DCS spokesman Logan Maistry commented.

Attorney Egon Oswald, who is representing six survivors of the recent St Albans violence, notes: “When people are treated inhumanely and the fundamental issues are not dealt with by the system, they will try to find their own solutions.

“The recent stabbings at St Albans were undoubtedly a protest against prison conditions. In addition, during the St Albans attacks, warders beat up inmates, not to protect themselves but to punish them. This constitutes torture. As long as the basic reasons are unresolved and papered over, prisons will remain on edge and inmates will continue to be subjected to horrific levels of violence.”

What’s more, the PE High Court decision followed a 2010 UN Human Rights Committee (UNHRC) judgment which found SA guilty of gross human rights violations after St Albans inmate Bradley McCallum submitted a complaint alleging he was beaten, raped by a warder with a baton, attacked by dogs, shocked, trampled on and tortured during the mass beatings.

More than two decades since the advent of democracy and 10 years after the release of the Jali Commission’s report into allegations of Corruption, Maladministration and Violence in DCS, little seems to have changed in SA’s prisons where human rights violations seem the order of the day. According to Muntingh, in 2014/2015, more than 3,150 prisoners alleged they had been assaulted by officials, an increase of more than 3,000 compared to 2011/12 – indicating an entrenched culture of impunity in DCS, and a failure by JICS to deliver on its constitutional purpose.

Though gangsterism has long been the default excuse, or explanation, for prison violence, it now emerges that the problem may lie with management. Surprisingly, according to Sun City Medium B head Samuel Mhlangu, gangsterism at his centre has declined from 17 cases in 2013 to just one in 2016. And, according to Maistry, very few of DCS’ 243 correctional centres are currently grappling with this challenge.

A January South Gauteng High Court application demanding a written response from management to inmates’ grievances – filed by 12 members of Sun City’s Participative Management Committee – (PMC) also blames management for the prison’s problems. “Inmates feel totally disregarded and disrespected by management, they feel the only way to get answers and resolution of matters is through violence and destruction….” the application states.

“As PMC, we are against such behaviour but feel powerless as all our engagement with management has led to no progress,” says Phillip Lekgau, PMC deputy chairman. Lekgau says that for a year-and-a-half management has failed to deal with a long list of inmates’ grievances relating to overcrowding, lack of bedding, clothing, dietary needs, transfers and inadequate medical attention.

“Though gangsterism is not the culture of Sun City, and hasn’t been for many years, inmates’ frustrations with management means the threat is starting to re-emerge. As a result, the prison is back into a state of very high tension. Gangs are threatening to riot and chaos may ensue eminently. Unless action is taken, lives may be lost, the innocent could be injured, State property could be damaged.”

Krugersdorp inmates also claim that management’s failure to address inmates’ concerns – rather than gangsterism – led to the October riots. Though both DCS and JICS deny claims that anyone died when 14 cells were set alight, a Krugersdorp inmate who wrote to the Wits Justice Project (WJP) last month claims three people lost their lives as a result of either burns, or smoke inhalation.

According to this source, the offender who allegedly died in the flames set himself alight to draw attention to his plight – he was unable to obtain a transfer: “Conditions of detention are so bad here, that … offenders resort to cutting themselves to ribbons with razor blades and other sharp objects in order to be transferred to a better managed centre.”

When Edward Moabi arrived at Krugersdorp late last year, he says his cell designed to house 32 inmates accommodated 75. As a result, Moabi was forced to sleep in the toilet while other inmates slept in the showers. Luckily for Moabi, he managed to purchase a bed for R500 from an inmate who was leaving: “I couldn’t face sleeping on the toilet floor any longer. Until now, I’ve never been given bedding. Inmates usually have to buy their bedding from other inmates or warders.”

Predictably, chronic overcrowding leads to a host of other problems – including illness and what Muntingh, citing the Jali Commission, describes as “the horrific scourge of sexual violence that plagues our prisons, where appalling abuses and acts of sexual perversion are perpetrated on helpless and unprotected prisoners”.

According to Moabi, sodomy and rape are common in Krugersdorp: “Officials do nothing even when inmates complain, or ask for medical assistance. Also, anyone who doesn’t toed the line is locked up in Cell 44. Not even a toughened gang member wants to see the inside of that cell. About 105 offenders are locked up there in a small cell supposed to be for 32 people. It’s literally the last stop to hell. Not many people survive with their sanity and humanity intact.”

To make matters worse, inmates believe they have no effective channel to voice their grievances. “What is happening to inmates here is inhumane,” Moabi says. “No one can even remember the last time an independent prison visitor from JICS was seen here.” JICS spokesman Umesh Raga says this situation will be rectified in April when independent prison visitors will be appointed.

Sonke also claims JICS lacks the structural, operational and institutional independence and legal powers to discharge its functions effectively, and maintain credibility. It argues that JICS should be reconstituted as a completely independent body in the same way that IPID is independent of the South African Police Service.

At present, not even the Inspecting Judge, who heads JICS and is appointed by the president, has the power to take disciplinary action, make binding recommendations or hold government accountable for violations. And ironically, as presently constituted JICS is financially dependent on DCS – the very department it was set up to monitor.

Without effective oversight, an entrenched culture of impunity informed by a lack of regard for culpability or consequence has for many years appeared to characterise the Correctional Services mindset. As a result, urgent action is required to address grievances before SA’s prisons implode and violence spills out over prison walls.

While DCS drags its heels regarding its investigations into the recent prison violence, Van der Westhuizen has a unique opportunity to start reclaiming JICS’ credibility. Though establishing a public hearing is likely to reveal some uncomfortable truths about life behind bars, it will hold Correctional officials publically accountable and, at the very least, help bereaved families obtain closure over their loved ones’ deaths. After all, prisoners’ rights are indistinguishable from human rights.