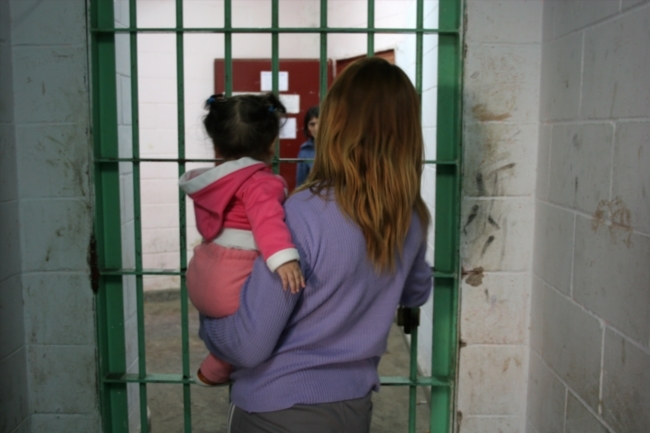 When women and crime end up in the same headline in South Africa, it usually concerns women who are victims of domestic violence and rape. But women also commit crimes and end up serving time in prison. WJP senior journalist Ruth Hopkins' first piece in her four part series on women in prison. She spoke to women incarcerated in Pollsmoor prison in Cape Town and Johannesburg Correctional Centre about how they ended up in prison and how they survive behind bars.

Mbali Mabena is wearing a miniskirt, lipstick and heels. Her hair, shaved close to her head, is dyed blond; her eyes are bright and sparkly. Mbali does not look like a typical prisoner and the family room at the female correctional centre in Johannesburg, part of the sprawling prison complex known as Sun City, also doesn’t look like a typical prison. The place is warm and full, young children are crawling onto their mothers’ laps, husbands arrive, carrying bags full of necessities. There is a small shop in the meeting room, where the women inmates and their loved ones can buy soap, cigarettes, bread, noodles and other items. The women all wear a navy blue prison uniform with the white logo of the Department of Correctional Services (DCS), but not one looks the same. The women have fashioned individual looks, by redesigning shirts, trousers, mini and maxi skirts out of the worn and dirty uniforms.

Mbali sewed her miniskirt from the drab prison uniform. She is one of roughly 4000 female prisoners in South Africa, a tiny group compared to the approximately 157.000 male inmates. About one third of women prisoners is awaiting trial.
Mbali ended up in prison after she was charged and then convicted of sex trafficking. Not a lot of research has been carried out into women’s pathways into prison. Of the 53 women inmates interviewed in Hard Times, a 2012 research report on women prisoners in Pollsmoor produced by the University of Cape Town’s gender, health and justice unit, 32 % were imprisoned for murder and nearly half was convicted of an “aggressive” crime. Three quarters of the group was in prison for the first time.

The world median in terms of women inmates is 4.4% of the total prison population and it is growing every year. South Africa has one of the lowest rates of female incarceration in the world. Its growth trajectory is a mirror image of the international trend: SA’s female incarceration decreased from 8 percent of the total prison population in 2000, to its current magnitude of 2.6%. Of the 243 prisons in the country, only 22 provide for female inmates.

Because SA’s women inmate population is comparatively small and relatively peaceful, it is an oft overlooked group.
This is reflected in the DCS White Paper on Correctional Facilities, an important policy document for prisons and prisoners in SA. The section on female prisoners is not even a page long and filled with rather vague promises. The Correctional Services Act does stipulate the obligation to create a gender-sensitive environment in prisons, but there aren’t many concrete guidelines on how to create this environment.
The internationally applicable Bangkok Rules, adopted by the UN’s General Assembly in 2010, are the first set of rules that focus on women prisoners exclusively. While South Africa has endorsed these rules and made them part of prison policy, this doesn’t always reflect in the conditions on the ground.

Overcrowded prison cells are at the root of most problems women prisoners face. The female section of Pollsmoor prison for example, has a bed shortage of 322, according to the Judicial Inspectorate for Correctional Services’ (JICS) most recent report.

Charlotte* spent time in the awaiting trial section of Pollsmoor prison, after her ex-boyfriend framed her by placing 10 Kgs in her luggage. He then alerted airport security. “The cell was very overcrowded. I had to sleep on the floor. I had to trade some of my clothes for a blanket and a pillow. The worst part was the stench, the toilets were filthy. I didn’t eat a thing while I was in there,” she says.

In April 2016, Constitutional Court Justice Edwin Cameron visited Pollsmoor and wrote a scathing report on the remand sections – male and female. “Ninety-four women were crowded into a poorly aerated room. The mattresses were stinking. There was no working toilet, a clogged sink drain and only cold water … Sheets and blankets were infested with lice … [and] the cell was infested with cockroaches.”

In the sentenced section of Sun City conditions are better, because the volume of prisoners is much smaller and more stable than the awaiting trial section. Sentenced prisoners also have access to education and vocational programmes, social workers and psychologists.
But does this amount to the ‘gender-sensitive environment’ the Correctional Services Act requires?

Pulane* thinks not. She was convicted of murdering her partner, who she claims she killed in self-defence in Cape Town 2013. She was sent to Pollsmoor, but was transferred to Johannesburg about a year ago. “Not everyone can afford to buy sanitary pads and tampons. The prison authorities (in Pollsmoor) provide some, but it is not enough.”

The relationship with their children is often a source of immeasurable pain to the women. Children are allowed to stay with their mothers in prison up to the age of two. Mbali, who gave birth to her second daughter in prison, handed her over to her mother after five months, because she felt there wasn’t proper health care for her infant. Although she feels she made the right choice, the distance between her and her kids brought on a depression.

“My mother and two daughters live in Pretoria and they can’t afford to visit regularly, as my mother is unemployed. When they do come, I can barely handle it. It makes me and my mum sad and my youngest daughter is afraid and she runs away from me.”

For some women though, prison presents a welcome respite from the violence they endured in their daily lives. 67% of the women interviewed for Hard Times experienced some form of domestic violence and/or rape in their adult life. For some of these women, prison presents a comparatively safe environment. One woman described her incarceration as ‘freedom’. She was finally freed from the life threatening abuse she and her children had to live under.

Ruth Hopkins works as a journalist for the Wits Justice Project.