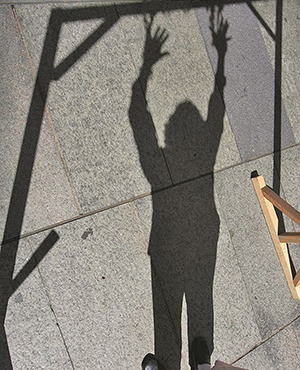 In March, Kgolofelu Khoza was allegedly chained in a crouching position to a door in an isolation unit – also known as the “bomb cells” – at Johannesburg Correctional Centre. He claims he was kept there for two days and a night.

“They first bound my feet with leg irons and then they slipped my hands between my legs and cuffed them, and then fixed the other end of the cuffs to the grill door,” Khoza told human rights lawyer Egon Oswald, who consulted with Khoza.

He gave Oswald permission to share the details of the consultation with the Wits Justice Project.

The department of correctional services denies that Khoza was treated this way and, in an email to the Wits Justice Project, pointed out that Khoza had a record of disciplinary infractions, including throwing faeces at officials. They declined to provide any proof of this record.

However, inmates Loyiso Bera and Nonkululeko Mantshonga, who were kept in the same unit, claimed they saw Khoza shackled to the door. Mantshonga told Oswald that he was walking from the showers to his cell when he saw a group of warders trying to chain Khoza to the door.

“I told them I was going to report them,” he said.

The officials continued to chain Khoza and allegedly left him there for eight hours without providing him with an opportunity to stretch, go to the toilet or eat.

The Correctional Services Act outlaws segregation as a form of punishment. The Anti-Torture Act defines torture as an intentional act that causes severe physical or mental pain committed by a public official for the purpose of obtaining information or a confession, or to punish, intimidate or coerce.

While South Africa’s history is mired in state-sponsored torture that saw many people killed, injured and traumatised, the rise of torture in prisons and police cells remains unnoticed, underreported and unchecked.

Despite the promulgation of the Anti-Torture Act in 2013, and dozens of documented cases of torture every year by the Judicial Inspectorate for Correctional Services (Jics) and the Independent Police Investigative Directorate (Ipid), there have been hardly any prosecutions.

Sithebe had applied for permission, which was granted, to order a clock radio. In February last year, members of his family delivered the radio.

“I kept asking for the radio, but the responsible warder wouldn’t give it to me. By the end of March, I had had enough. Out of frustration, I threw my food on the floor,” Sithebe said.

He alleges that two warders then beat him up in the supervisor’s office.

“They used the short ends of their batons to beat me. I had my arm in front of my face. My watch fell off while they were beating me ... they just beat me more and I lost the watch.

“They then took me to the isolation unit and started beating me again in the passage close to the unit. When I looked up, I saw about four warders assaulting me ... There was a lot of blood on me and on the floor. The warders ordered me to clean up.”

He was then taken to the hospital unit where he told the nurse that his arm was broken, but she said he was not a doctor and gave him painkillers, ointment and an injection.”

Sithebe had to wait for five days before he could see a doctor at Chris Hani Baragwanath Hospital, who confirmed that there was a “comminuted fracture” in the bone in Sithebe’s left forearm, which means the bone was splintered in many places. He also sustained several wounds on his legs. The scars are still visible.

The Wits Justice Project has seen Sithebe’s medical files – which confirm his injuries – in which prison authorities claim he “allegedly fell in prison”, followed by the doctor’s observation that he “was assaulted”.

When Sithebe tried to report the assault, he was quickly transferred to Leeuwkop, where the Wits Justice Project spoke to him.

Asked to respond to the medical evidence that confirms Sithebe’s arm was broken, Logan Maistry, spokesperson for the department of correctional services, said: “Minimum force was effected in line with the Correctional Services Act. The offender was examined by healthcare professionals within the hospital section of the centre. Furthermore, a case of assault was registered against the offender.”

Sithebe denied assaulting inmates or officials. Jics investigated the complaint and concluded: “Prima facie, it appears that the inmate was the aggressor, but the nature of the injuries allude to serious force being applied.

In May, another spate of violence saw several inmates wounded and injured in the prison. On May 7, a Somali national, Mohammed Yusuf Younis, alleged that warders kicked, hit and pepper-sprayed him when they found a cellphone in his possession.

“A warder held my arms while another punched me repeatedly in the face. I fell down. The warder kicked me many times in the stomach. He also sprayed pepper spray directly into my eyes,” Younis told Oswald, who consulted with him two days after the assault.

Like Sithebe, Younis also alleges that he was denied medical treatment at the prison hospital after the assault. Oswald observed two broken teeth, multiple bruises and abrasions, a swollen right lower jaw and a “pronounced limp” in Younis.

Boitumelo Mpane and Sidwell Pule Myocwame say they were assaulted on the same day.

“I recall a warder pulling back the panel on the cell door and then spraying pepper spray into the cell,” Myocwame told Oswald three days after the assault.

Mpane said: “I was beaten and kicked repeatedly with batons, fists and hands.”

Maistry, on behalf of the department, said the inmates were blocking the door, which was why pepper spray was used.

The data also reveal that the use of force in correctional centres shot up to 619 reported incidents this year, compared with 461 reported incidents in 2014/15. Umesh Raga, the head of legal services at Jics, indicated that it would investigate the allegations and publish a report.

“We have decided to launch a full investigation into each allegation. We will also examine the possible systemic practices,” he said. The investigation has not yet been finalised.

In 2014, Justice and Correctional Services Minister Michael Masutha, presented worrying statistics in Parliament. In 2013/2014 there were 1 298 officer assaults on inmates, yet only 19 officials were convicted – two of whom received a suspended sentence. From 2011 to 2014 a total of 3 440 inmates were assaulted, but only 40 of these assaults resulted in a conviction.

The Ipid reported in their 2015/2016 annual report that two police officials were prosecuted and convicted for torture. They were fined R500 and R12 000 respectively.

Despite the extensive medical evidence of torture and abuse – something inmates usually struggle to obtain – the National Prosecuting Authority (NPA) declined to prosecute. Ballard appealed the decision not to prosecute and, three years after the case began, the NPA agreed to reopen the case if the inmates suspended their appeal.

However, there is seemingly still little will to prosecute prison officials for the alleged torture.

On May 30, the prosecutor sent Ballard a disheartening email: “I still have not received the completed investigation from Sandton SA Police Service. I would suggest that you contact Colonel Killian [the investigating SAPS officer] to get the status of this matter.”