"With statistics about official-on-inmate violence currently as clear as mud and the truth hiding in plain sight, only one thing is certain: brutality behind bars appears to be an issue requiring urgent oversight and attention. Meantime, the prison oversight body needs to take a long hard look at its reporting methods which seem to conceal a whole lot more than they reveal." 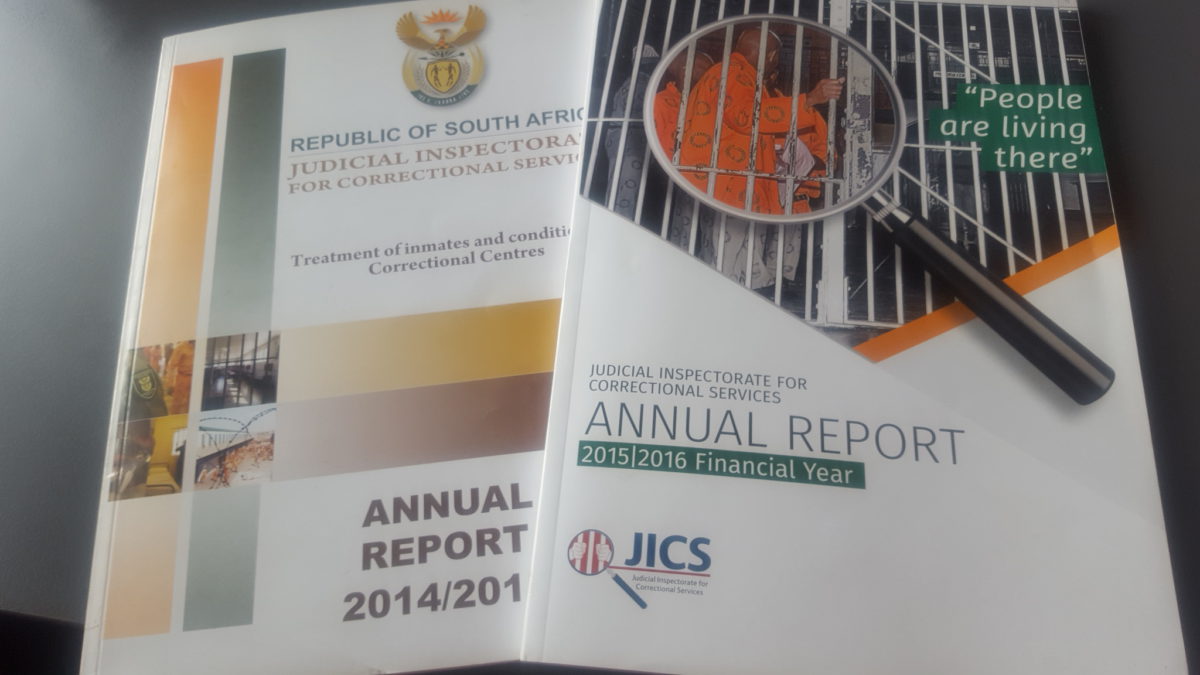 Anyone taking the time to mine the turgid annual reports of SA’s bloated bureaucracy will occasionally be rewarded with a gem - a valuable nugget of information which will make the mostly tedious task worthwhile. For example, trawling through tables of official-on-inmate violence in the recently published 2015/2016 annual report of the Judicial Inspectorate for Correctional Services (JICS) reveals a dirty little secret: A staggering 316% increase in assaults on inmates by Department of Correctional Services (DCS) officials over the numbers recorded the previous year.

Repeated requests by the WJP (Wits Justice Project) for an explanation from JICS over the course of a week failed miserably. Instead, contradictory and confusing numbers ranging from a zero percentage increase to 34% were proffered by four senior officials.

Either JICS officials are unaware of the genie unleashed in their latest report, innumerate or hell-bent on concealing the truth. In the absence of any official explanation, the only other possibility is that the tables contained in the reports are incorrect, or the reporting structures so opaque, technical and confusing as to be incomprehensible.

Though the previous 2013/14 JICS annual report highlighted a bad-enough 79% increase in official-on inmate assaults over the previous year – a detail the report describes as “worrisome” - the most recent report makes no mention of what appears to be a disturbing upward trend of violence and brutality behind bars. (The 2014/2015 report cites a total of 195 incidents of official–on-inmate assaults and the 2015/2016 report cites 811 incidents)

So what is the reasonable person supposed to assume from an apparent 316% increase? That the statistics lie? That the department has improved its reporting methods? No comment was forthcoming from the prison oversight body. In fact, it took a tame geek with a special interest in torture and assault behind bars to ferret out the figures and flag the bad news.

The good news, according to JICS National Manager Legal Services Umesh Raga and Manager of JICS Complaints Unit Shariefa Wesson, is that a zero percentage increase in official-on-inmate assaults was recorded. If this is indeed the case, why not shout about it from the roof-tops? Why does the report ignore this astounding achievement when a decrease of such magnitude would certainly be worth bragging about!

To add to the confusion, Civil Society Prison Reform Initiative (CSPRI) researcher Gwen Dereymarcher, a leading expert on oversight and law enforcement calculates a 25% increase in allegations of official-on-inmate assaults based on tabulated figures of reports received by JICS Department of Legal Services between 2014/15 and 2015/16.

"JICS reporting structures and annual reports are very technical and confusing to the layperson,” Dereymarcher says. “Also, the manner of reporting changed in 2015/16, making a comparative exercise of publicly available data even more difficult. The confusing information available in the annual reports does not assist the public, or Parliament, in understanding the issues and ensuring that DCS is held accountable."

Where the truth lies is anyone’s guess. Hopefully, JICS recently-appointed Inspecting Judge Johann van der Westhuizen will make it his business to find out. A boxing fan since childhood, the retired Constitutional Court Judge has entered the ring intent on instilling a human rights-based culture in JICS, ensuring officials are accountable and that they understand that prisoners’ rights are indivisible from human rights.

Last month, twenty-two years since the advent of democracy, Judge Lucy Mailula told a JICS conference on torture and assaults in Western Cape prisons: “We wouldn’t think we’d need to be looking at torture now. We’d think human rights are a given… People don’t lose their rights because they’re incarcerated…….”

One good sign is that increasing awareness of inmates’ rights has meant that over the last few years civil society and organisations like CSPRI, Sonke Gender Justice, NICRO and the WJP have ramped up the call for increased prison oversight. CSPRI Professor Lukas Muntingh is adamant that independent oversight is the most effective way to prevent torture and assaults behind bars and to promote transparency and accountability.

Right now, JICS’ independence is questionable given that the organisation’s salaries are paid by DCS, the department their job it is to oversee. "JICS doesn't have the financial resources, capacity or investigative skills to carry out its mandate effectively,” explains one insider.

With statistics about official-on-inmate violence currently as clear as mud and the truth hiding in plain sight, only one thing is certain: brutality behind bars appears to be an issue requiring urgent oversight and attention. Meantime, the prison oversight body needs to take a long hard look at its reporting methods which seem to conceal a whole lot more than they reveal.