What pushed Ellen Pakkies over the edge?

Ellen Pakkies returned to the scene of the crime where she had strangled her son. Her story, as relayed to legendary South African lensman David Goldblatt, was just as sorrowful as understanding the reasons why she killed her child.

Photographed on the same bed where Pakkies strangled her son Abie in 2007 in Lavender Hill, Cape Town, she shared her soul-destroying story on what pushed her over the edge during a photo-shoot and interview with Goldblatt.

Several Capetonians are featured in Goldblatt’s book Ex-Offenders at the Scene of the Crime which was launched in Johannesburg last month. Goldblatt was fascinated with the psyche of criminals, wanted to understand, without judging, what made them turn to crime.

Goldblatt and his wife Lily, themselves victims of crime, captured the stories of inmates in South Africa and the United Kingdom between 2008 to 2016.

He finished the book putting a human face to inmates before his death on June 25, 2018. He was 87. With text from his documentary producer daughter Brenda Goldblatt and an essay by Erwin James, Goldblatt’s book Ex-Offenders at the Scene of the Crime was launched in Johannesburg on 26 April. 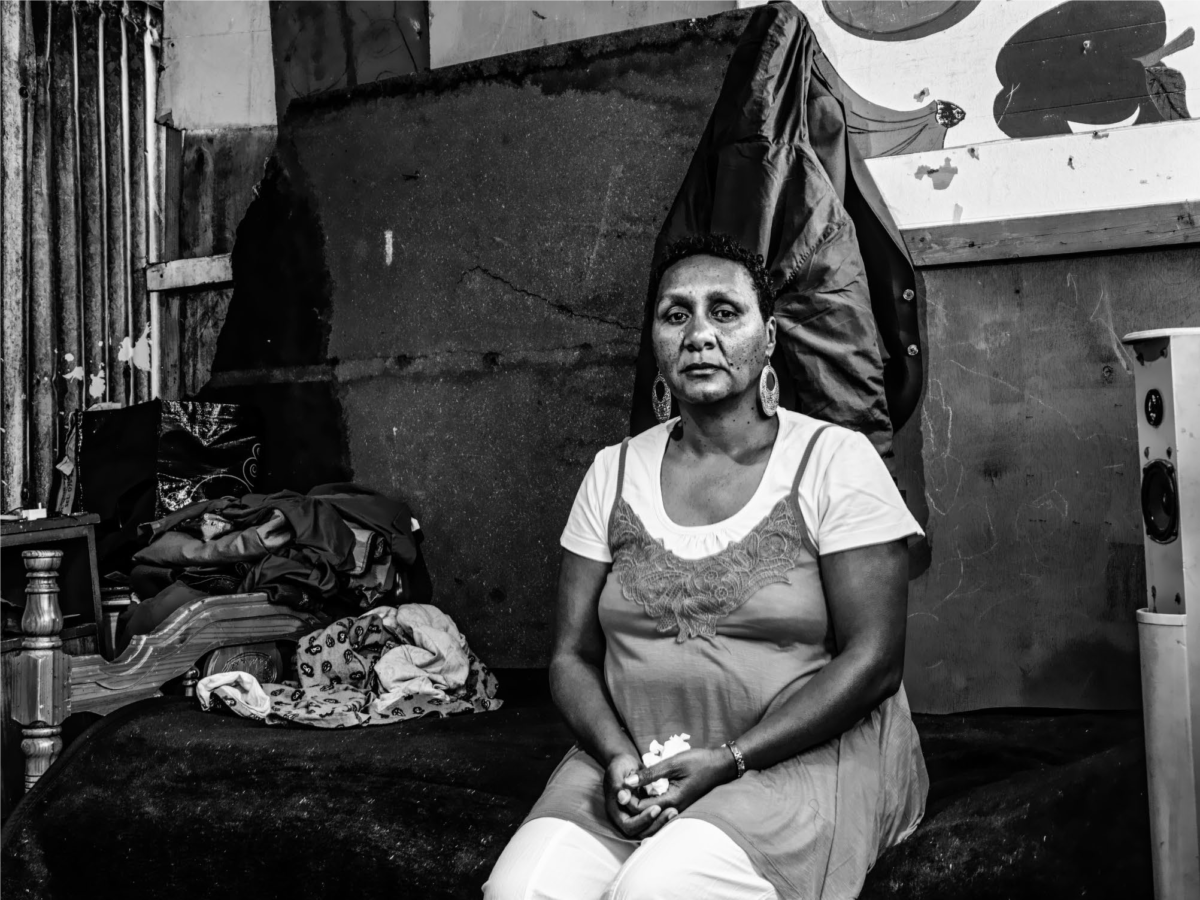 Photographed on the same bed where she strangled her son Abie in 2007 in Lavender Hill, Cape Town,Ellen Pakkies shared her soul-destroying story on what pushed her over the edge during a photo-shoot and interview with Goldblatt.

Along with the story of Pakkies, the book features a diverse mix of individuals in South Africa and the United Kingdom who served time for a variety of crimes ranging from murder to robbery and theft, among other unlawful misdemeanours.

But the story of Pakkies is particularly chilling. Abused as a toddler and gang-raped at 13, she ate out of garbage bins and took to prostitution to survive. “It felt dirty, but it was my way to escape,” she says.

Her oldest son Abie was born after she was raped at 17. Pakkies married at 18. Six months later, she was divorced. Her second marriage saw her have another child Colin, but the union ended after two years. She met Ontil, the man she is married to now, at 28.

Speaking about Abie, she recalls he would steal anything he could lay his hands on. Power lines were cut. Bathroom pipes were stolen. It was so bad they put burglar bars on the doors and windows of their house. But it did not deter Abie. He would use wire and steel garments through the window.

“The things that he stole were not important to me. He was important to me. I made this room for him in the backyard. I tried to make him feel that he belonged somewhere, but he never saw it like that.”

He was hooked on drugs and would sell anything he could to obtain money to feed the habit. “Abie was a quiet child, very loving. When he said something, he made you laugh. At 13, he began to change, because he started using tik. From then on, it was downhill. Clothes and dishes were stolen,” she recalls.

“One day, I thought I could not go on like this. I went to court to get an interdict. It didn’t work. I gave up hope.”

Pakkies says she often had to leave the house quietly because he would follow her, forcing her to draw money at the ATM, until her wages were spent. “I had one pair of panties. I stank because I couldn’t wash properly. One day, I thought I could not go on like this. I went to court to get an interdict. It didn’t work. I gave up hope,” she adds.

But Pakkies was fed-up. Recalling that fateful day, she says: “I went to talk to him. I took him some tea. I saw a rope on the way and grabbed it. I stood in front of him with the rope in my hand. I cried because of what I wanted to do. I put the rope around his neck. He woke with a fright, grabbed a plank and swore at me. I said to him: ’Don’t swear at me and put the plank down, I want to talk to you.’ I asked him: ‘Why don’t you appreciate what I do for you? When are you going to listen?‘ He said: ‘Mammie, I am going to listen’. As he said that, I pulled the rope. I cut my hands. I used his sweater to pull tighter.”

Pakkies says she went to get dressed then returned to look at Abie. “He was lying peacefully, like someone asleep. I told my boss, Mr Rogers: ‘I have killed my son.’ He took me to the police station. Mrs Rogers supported me. She bought me underwear and towels. The clothes that I had were full of stains. You must bare your shame before everyone.”

Pakkies received a three-year suspended sentence with 62 hours of community service. Now, mothers with children on drugs come to her for support.

Another person who featured in the Goldblatt book was Blitz Maaneveld, a gangster, named so because he was fast as ‘lightning’ with a knife. But he was murdered shortly after his photograph was taken so his former girlfriend told his story.

Blitz was at The Terrace in Woodstock, Cape Town, where he murdered a man with whom he had been gambling on October 7, 2008

He was born in Bonteheuwel in 1959. He had four brothers and two sisters. He was about nine when he stole from shops, then he started breaking into cars, then stealing cars, then more serious crimes like robbing people, then attempted murder, then murder.

All his life he was on drugs and he drank. His father was a gangster, and abusive towards his mother. Blitz believed that a woman should be beaten to make her listen.

“He beat me. A lot. I got an interdict against him because he didn’t want to stay away from me. I was afraid of him. Then he came here to my mother’s house for one week and was hitting me every night. Mommy called the cops and he disappeared. That was November 2008. Five months later, the cops asked me to identify the body.

“But I couldn’t, it was too decomposed. They had to show me a photograph taken when he was brought into the morgue. He was shot twice in the chest, once in the back by gangsters. He robbed one of the drug merchants. Everybody had a reason to kill him. I wanted to kill him. Part of me was happy to see that he’s dead and he can’t hurt me anymore, but another part of me was very hurt because I loved him.” 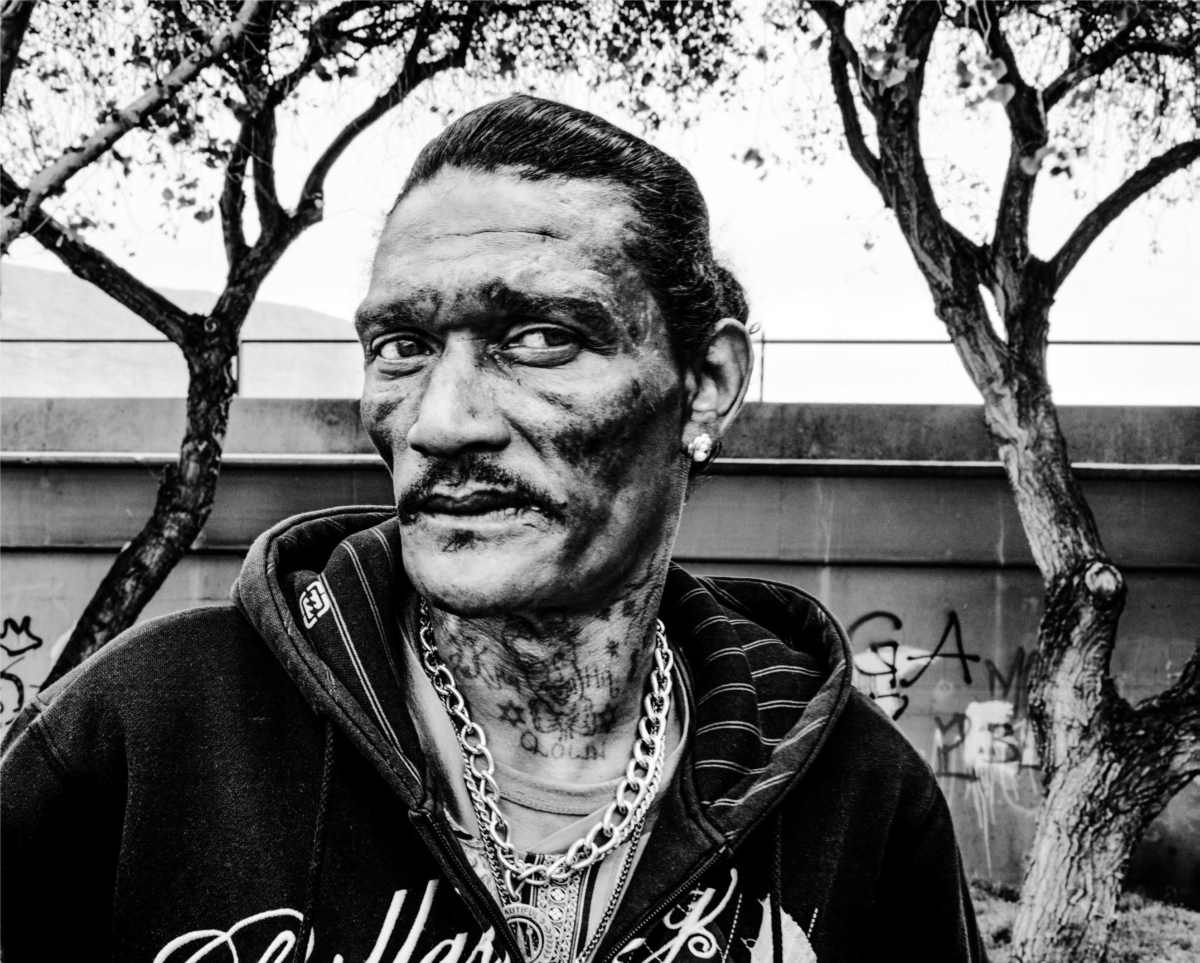 Another person who featured in the Goldblatt book was Blitz Maaneveld, a gangster, named so because he was fast as ‘lightning’ with a knife.

East London-born Siyakholwa Daniel says he sometimes robbed shoppers in Khayelitsha, Cape Town, using a toy pistol while living with his grandmother in the township.

“My father died in a mining accident, and then my mother and brothers also came to live with us in Khayelitsha. My mother works as a cleaner at a school. My granny is a domestic worker in the suburbs and my grandfather works at a rubbish dump.”

Around March 8, 2011, he was arrested after his several robberies taking people's wallets and their phones using the toy gun. “The police sent me home with a warning.”

But he has since turned over a new leaf after a friend told him about a non-governmental organisation named Realistic, which helps people rebuild their lives after crime.

“Realistic has helped me rebuild my life. I was originally a very trusted child at home, but after I started committing crime I was not trusted anymore. I have become a trusted child again.”

Born in 1930 in Randfontein on the West Rand, Goldblatt began taking photographs in 1947 but worked as a photographer from 1963. Although he captured aspects of South African society, Goldblatt worked on two personal projects outside the country.

In 1999, he photographed the remains of a blue asbestos mine and its community in Western Australia, while from 2008 to 2012, he photographed ex-offenders at the scene of the crime in England (and South Africa).

This was one of the last projects Goldblatt worked on before his death. The David Goldblatt Legacy Trust, Wits Justice Project and Goodman Gallery launched Ex-Offenders at the Scene of Crime.

*This article was published in the Weekend Argus and Sunday Independent