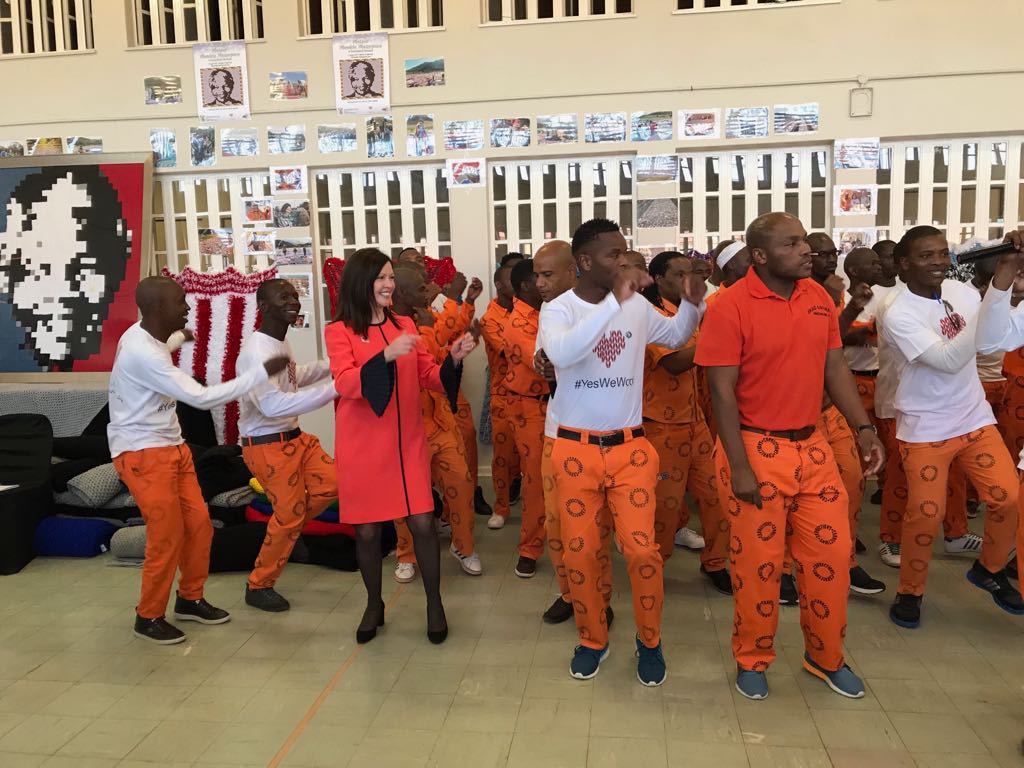 The “Massive Mandela Masterpiece” (MMM) project, aimed at creating the largest portrait blanket in the world, was launched at Zonderwater Correctional Centre near Cullinan last week. Participating inmates at eighty prisons around SA will help knit a 4,500 square meter blanket resulting from a unique partnership between ‘67 Blankets for Nelson Mandela Day’, the Nelson Mandela Foundation and the Department of Correctional Services (DCS). With every black or grey blanket representing just one pixel, the ambitious project driven by 67 Blankets founder Carolyn Steyn will ensure Madiba’s face is visible from outer space.

Steyn introduced blanket-knitting to SA correctional centers two years ago as part of an offender rehabilitation programme which has enabled inmates to provide warmth to more than 30 000 impoverished SA children and the elderly. In next to no time, the programme has registered numerous accolades – including the creation of the world's largest crochet blanket, according to the Guinness Book of Records, which was displayed around the statue of Nelson Mandela at the Union Buildings in 2015. However, inmates subsequently produced an even bigger blanket which was displayed at Drakenstein Correctional Center last year.

Now Steyn has her sights set on smashing all existing records to commemorate Nelson Mandela’s 100th birthday anniversary in April 2018. “You have become the role model for Correctional Centers all around SA. Not only SA, but internationally …..,” Steyn told inmates. ”Zonderwater has literally become a blanket-making factory. You have worked out how to create true ‘art’ blankets, creating blankets with strong messages, ‘No to crime - no to racism - no to xenophobia.”

As a response to the project and it’s collaboration with Zonderwater, inmate project manager Muziwendoda Kunene praised Steyn and 67 Blankets for giving them a chance: “Carolyn realized men in orange are not lost, and those who are lost can be redeemed. She realised that the orange uniform does not personify who we are.”

The event was well attended by supporters and project participants who sat in the crowd crocheting and knitting, holding small needles in their large hands. A packed hall filled with members of the public, Steyn’s loyal “Knitwit” followers, and prisoners - many of whom wore white t-shirts emblazoned with “Yes, We Wool” logos - were treated to musical entertainment by Zonderwater inmates. Prisoners also performed a ’67 Blankets Pledge Song’ paying homage to Mandela and praising the project for its achievements to date.

DCS Acting National Commissioner James Smalberger, who addressed inmates in Sotho, praised the initiative saying it was beneficial to inmates: “They feel it brings some humanity back into their lives. During the programme, inmates don’t have time for negative things in prison.”

“Crocheting has significant psychological and social benefits, which can improve the well-being and quality of life of offenders,” a DCS spokesman noted in a statement issued later. “As a skill and creative occupation, it has therapeutic potential for the participants. This initiative will enable offenders an opportunity to realise their full creative potential.”

At the closing, the 67 Blankets team gave attendees a taste of what is to come by displaying a small part of the Massive Mandela Portrait – Madiba’s mouth- across the prison sports field. For the WJP, whose members hear stories of miscarriages of justice and human rights abuses behind bars on a daily basis, learning of positive initiatives which help inmates rebuild their broken lives offered provided welcome relief. 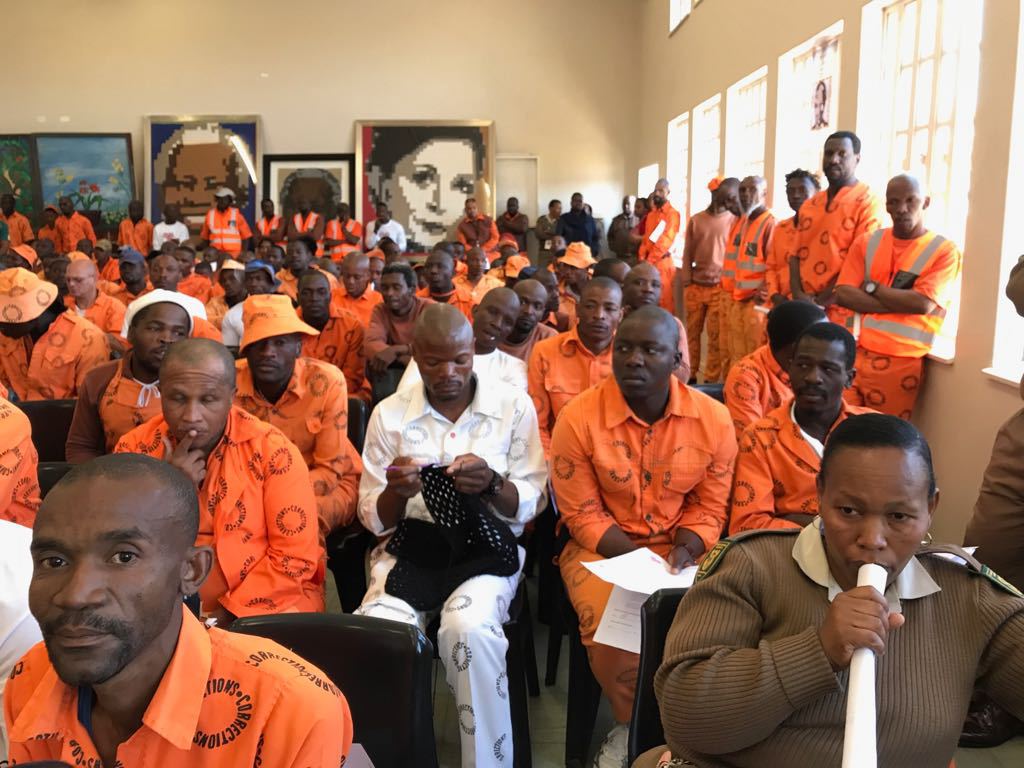 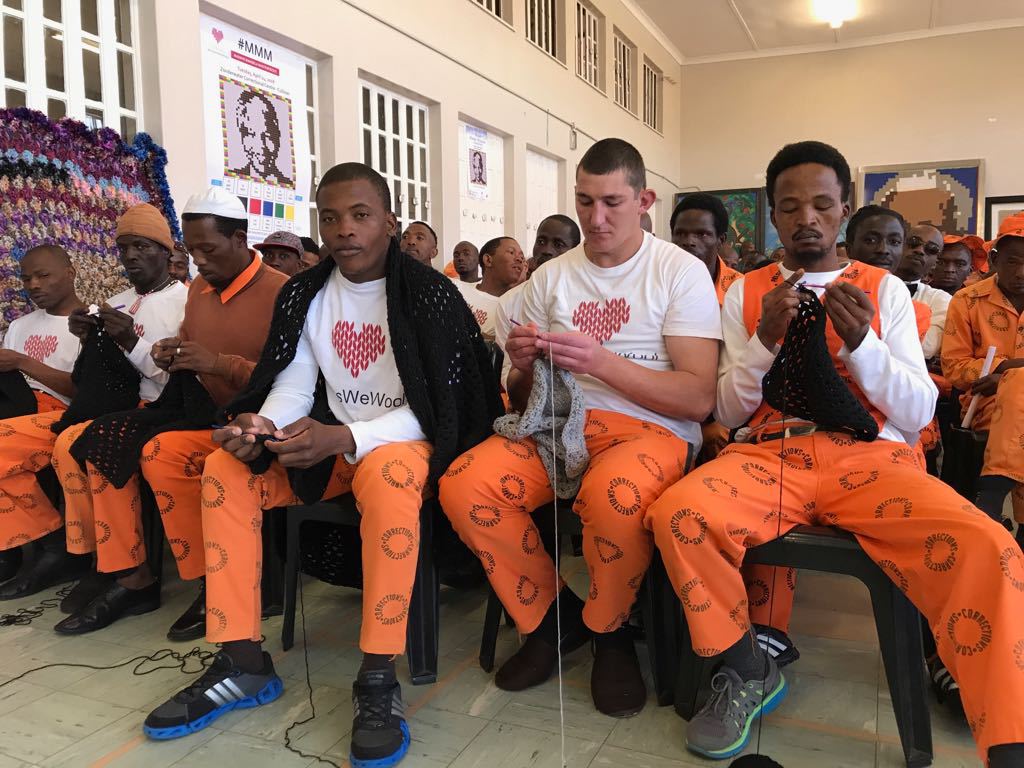 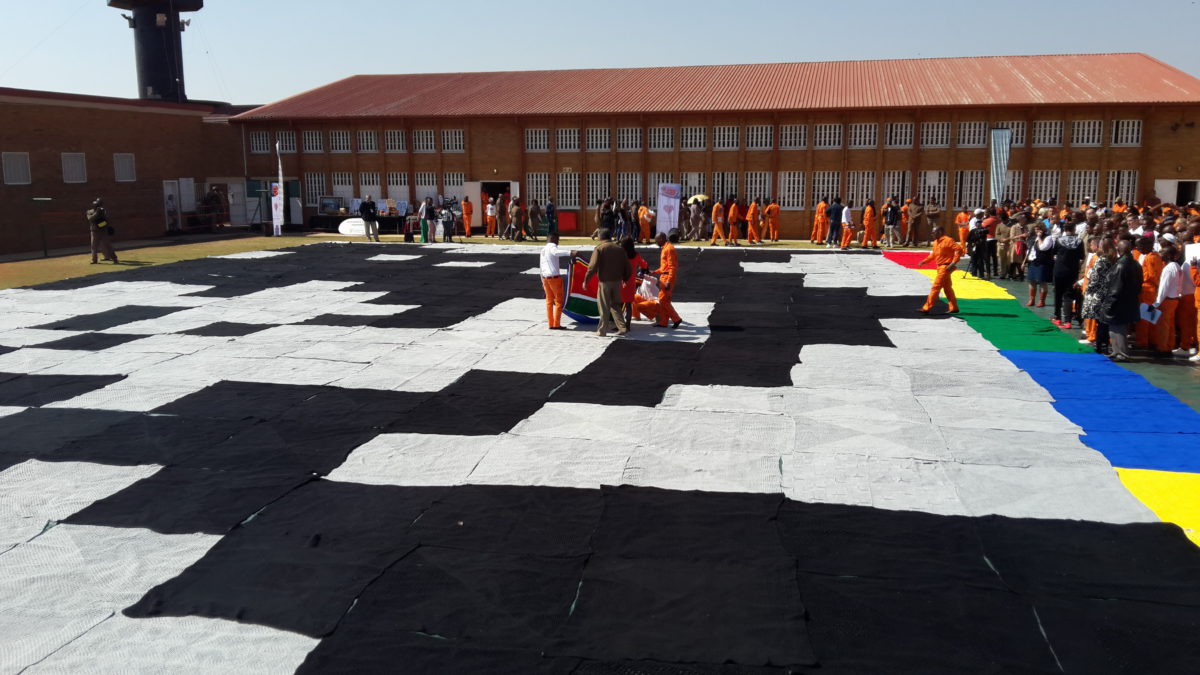 67 Blankets gave audience members a taste of the Massive Mandela Masterpiece. Pictured is Madiba's mouth, when the Masterpiece is done it will be visible from space